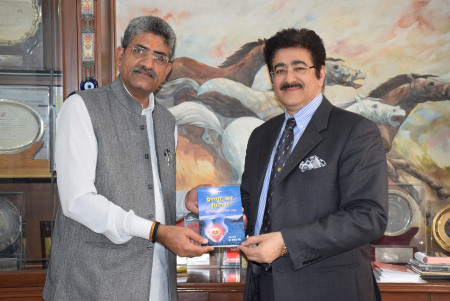 AAA- Asian Academy of Arts has been in the promotion of music, dance, drama, paintings, sculpture and writing from last so many years. Large number of events including exhibitions of paintings, dance and music recitals are placed before audience in different capacities and capabilities by young and old masters.
Recently a book “Prerna Ka Pitara” written by Choudhary Vedpal Singh has been released by Sandeep Marwah at Asian Academy of Arts at Marwah Studios, Noida Film City.
“It is book on the Indian way of life. It includes our traditions and culture. I am sure that the book will revive the lost culture of our young generation,” said Sandeep Marwah President of Asian Academy of Arts.
“I am honored that my book has been released at Asian Academy of Arts and now it is a part of Sewa Ram Library at Noida Film City” thanked Ch. Vedpal Singh.